Not going to lie, I’ve been holding off on this bra review for my own selfish purposes! What better way to kick off my first blog post than this, right?!

This is Ewa Michalak’s S Przeplatanki. It pretty much needs no introduction. Just check out those stock photos and tell me you aren’t intrigued! 😉 This isn’t just any regular old bra! It is more like a work of art! For a majorly obsessive bra fanatic like me, it doesn’t get much better than this. Not only is it beyond sexy, but you can play with it too?! 😀 And whatever mood you may be in each day, this bra will fit your every need!

Just a regular old day? No straps it is! 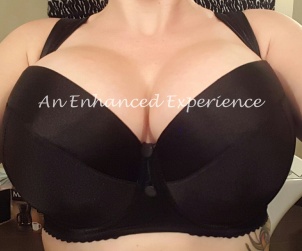 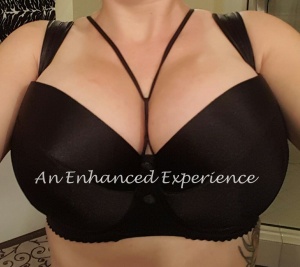 …Or you could be like me and wear all of them anyways 😉 Who cares if its a casual day! It looks great with just a vneck!

How about a hot date?! Get those straps out girl!

Sexy secretary play time?! You know what to do 😉
…No you may not have a photo for this one! 😛

When I first saw S Przeplatanki previewed by Ewa Michalak, I knew I’d HAVE to have it. I am all about things that are unique and unusual. And you cannot deny the level of sexy this bra exudes! Every woman needs at least one bra like that! While something like this may be readily available for someone in the good old matrix sized bra range… As a 65J, it was just a figment of my wildest dreams! I could yearn away but never would it be mine 😦 Those strappy, sexy bralettes that seem to be so in style right now?! Why yes I’d love one, but that is improbable and likely even impossible! A beautiful Marlies Dekkers bra? Ha maybe if I wore about 10 cup sizes smaller! I will never understand why designers stop making cute things above a D or E cup. Big boobs does NOT equal the desire for boring old grandma bras! (Especially when you had to pay for the big boobs to get them 😉 ) But my boobified sistas, rejoice! Ewa Michalak has made my (and probably some of yours too) dreams come true!

S Przeplatanki is made of a gorgeous black fabric that offers a bit of shimmer all the way up to the wings! At that point, it transitions into an even softer but no longer shiny black. The gore sports two little buttons that seem to be topped with the same fabric for perfect continuity and blending.

And the straps?! Oh the straps! They are the glorious comfort kind that may look slightly silly being how wide they are… But trust me, they are almost the best bra thing to ever happen to me! Obviously, these things are only semi-adjustable which so happens to be a bit of a problem for me (but we’ll get into that a little later!).

For someone who is no stranger to back, neck, and shoulder pain (thanks scoliosis!), these are sent straight from Bra Heaven! Seriously I can go on and on about them, but I won’t 😉 All along the comfort strap, there is a little spaghetti strap sewn down at various intervals to keep it attached while also leaving it available to act as an anchor point for the strappies. Now this is where the fun part begins! 😀

I won’t lie to you… This bra sort of comes with a learning curve! I was seriously so lost when I first tried playing around with the little strappies. I honestly wished it had come with an instruction manual! But I know that is pretty much the whole purpose of how this bra was made, creative freedom! I learned, however, that I don’t seem to be very creative 😉

After employing a little help (thanks sis 😀 ) and staring at the photos on Ewa Michalak’s site for… who knows how long, we managed to get me done up like my favorite one! Yes, I know I was just copying rather than being creative myself, but honestly, I was just happy to have finally figured it out! Attached to the bra itself was a clear bag holding the strappies! 😀 Included was 1 extra-long adjustable strap and 4 non-adjustable straps of just sliiiightly varying lengths.

The adjustable one is able to go all the way to the back of the bra and hook onto the two metal circles that are attached to the band near the hook and eye closures. 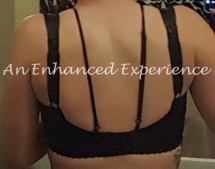 The shorter, non-adjustable ones are meant to lie sexily across the cleavage! I desperately wish that they could have been adjustable in length too, but it really would have taken away from the beautiful view to have any sort of adjusters at any point along them. So whenever they were too long, I just wrapped them around the strap a time or two before I hooked them on! 🙂

So how do you anchor the strappies down in the middle?! Well when I first received the bra I noticed a strap twisted and wrapped around the buttons on the gore. I honestly was so scared to pull it off. I felt like I was DEFINITELY going to break my brand new beautiful bra! With a little bravery, I went for it and realized I am an absolute idiot 😉 Had I looked at the pictures a little better, I would have known… There is a long strap loop (with 3 little mini loops within it) that comes out from the gore so that the straps can run through it and stay in place. It was wrapped around the buttons in case you want to wear the bra normally… Of course, duh >.<

The buttons themselves can also be used like an anchor point, similar to the center loop. Unless your boobs are too big and keep popping the strap off… No… That wasn’t happening to me… I swear 😛 Once you find all the possible points of attachment, its time for total artistic freedom! Please let me remind you… I wasn’t very good at this 😉 (If you are, please share your tricks! I NEED to know!) 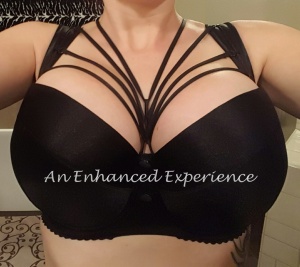 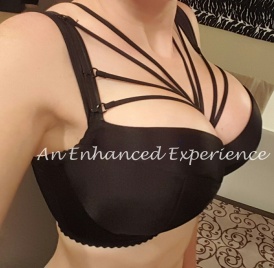 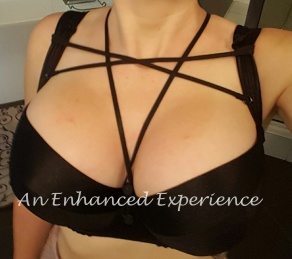 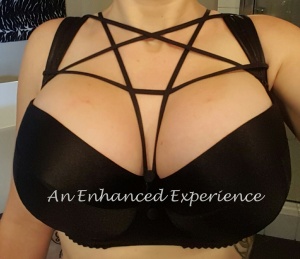 Well now that we’ve covered all the fun stuff, it is probably time for the important stuff! As sexy as this bra is, it’s also one of my most comfortable as well! I had previously tried an S style in a 65HH and my boobs crawled half way out! I wasn’t sure the S and I would mesh too well due to the gore being rather high in my size range. However, the wires touch at the top so it is narrow enough to work pretty well for me! I don’t get a full tack, but I don’t really with any bra due to my close-setness. The gore just slightly floats at the top which is a win in my book! I still feel very supported 🙂 The wires are a bit wider than I’d like overall but still on par with the usual narrowness found in most Polish brands! I am just an anomaly 😛 Boy are those wires firm though! I will have to shape them to my body a bit better because my rotated ribcage did not love the firmness as much as the rest of me did. The band was perfectly snug on this one, measuring in at 29” stretched. You have NO idea how happy that makes me! 😀 I also expect it to last quite awhile since it has 4 columns and 3 rows of hooks and eyes! My one and only gripe about this bra is the straps being too long for me. I am so high set anything that is only partially adjustable is bound to be a big problem for me! I wish I could request a slightly shorter strap be used. Thankfully, I think I can manage to fix it on my own. But to have only one complaint from a tough fit like me?! Now that is quite a feat! 🙂

What do you guys think about S Przeplatanki?! And how do you wear your strappies?! I’d love to hear from you! 😀